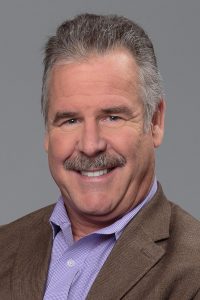 Marc Smathers is a fill-in host at WRJN “This is an exciting time in southeastern Wisconsin. Racine and Kenosha are experiencing growth that hasn’t been seen since the height of the manufacturing era”.

Marc has been part of the Racine, Kenosha community since he graduated from Carthage College nearly 40 years ago. He is actively involved in local non-profit organizations and has served on the board of Kids First Fund, Sixth Street Theater and Racine 4th Fest.

“I was born in a small town in southern, Ohio. We moved to Springfield, IL when I was 8 where I was introduced to politics. Many of my neighbors’ parents worked at the capitol, and I quickly learned how to listen to different points of view – yet form my own opinion.

Marc became interested in radio when he was 15 while producing a student run weekend radio show for his high school communications class in Plano, IL. In college he began covering local politics in Racine and Kenosha at
WGTD before joining WRKR radio as the News Director and later as an on- air personality.

“I enjoyed writing and producing radio.” He became Production Director at PIA syndication in Chicago. “We produced radio shows for hundreds of stations around the US including the Swanson Sports Explosion,
Northwestern’s Reviewing Stand, NBA game of the week as well as in- flight audio and video programming for United and American Airlines. “Getting back into radio is exciting and reconnecting with the community where I started my career is so rewarding.”

It’s likely you’ve seen some of Marc’s work over the last 30 years. He started working for GMR Marketing in 1988 and managed sports and entertainment projects for Miller Brewing Company including the 25th
anniversary Who tour, Nokia’s sponsorship of the George Strait Music Festival and Colemans’ NASCAR involvement. GMR was acquired by the advertising conglomerate Omnicom in 1998 where Marc specialized in agency acquisition and consolidation.

While at Omnicom the agency began working for the NFL and is responsible for the design and look of the last 5 Super Bowls and has been involved in the Summer and Winter Olympics for over 30 years.

Marc resides in Mt. Pleasant. His wife Robin owns Profiles Hair Design. They are the proud parents of one son and a grandson. He enjoys golf, playing racquetball and relaxing on his pontoon boat at his “cabin” on Little
Muskego Lake. He enjoys writing, teaching and consulting businesses and non-profits.

“I’ve had a great career and want to share my experience with others. I’m an adjunct professor in the business school at WCTC in Pewaukee and enjoy learning from my students”.