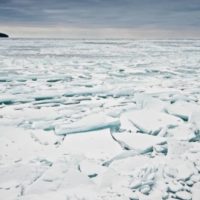 Authorities confirmed that least 27 people were rescued from a large chunk of floating ice in Green Bay, Wisc.  The Brown County Sheriff’s Office said in a post on Facebook that deputies worked with firefighters, Department of Natural Resources officials and the Coast Guard to safely remove the people from the ice off the shore of Point Comfort in Green Bay on Saturday.  Luckily, no one was injured in the incident.

In a statement, the Sheriff’s office said: “The Brown County Sheriff’s Office airboat and the U.S. Coast Guard’s airboat out of Sturgeon Bay were great assets during this rescue. Their ability to carry up to eight additional passengers aside from rescue personnel and ability to traverse ice and water terrain greatly cut down on the amount of time and risk this rescue took.”

The sheriff’s office received reports of broken ice around 10:17 a.m. as the ice floated about three-quarters of a mile during the rescue, settling about a mile away from the shoreline once the operation was completed. While the ice remained in “fairly stable condition”, it was “deteriorating rapidly” and cracking as water crashed against the edges.  According to authorities: “Barge traffic yesterday appears to have weakened the ice along the east shore of the Bay, therefore, the ice should be avoided for all recreational use.”